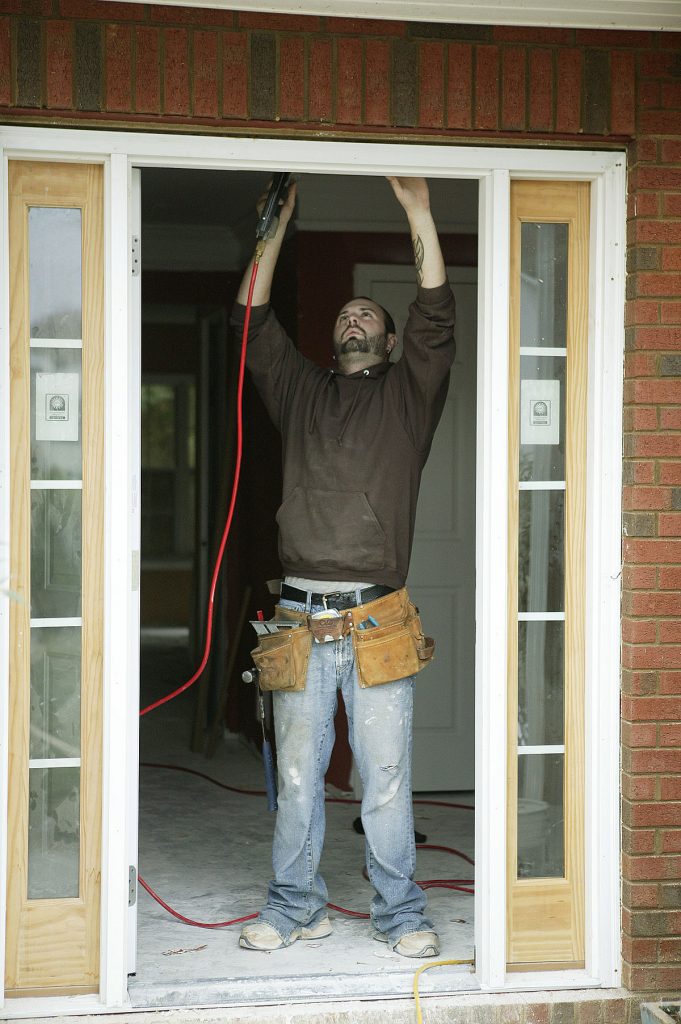 Businesses that can greatly benefit from the handyman services provided by Handyman Services of Lincoln include:

Commercial Handyman Services near Lincoln, NE: Whether you require simple maintenance, repairs, or larger remodel projects, we can help. The types of handyman services required may differ depending on the type of business. However, some of the more frequent tasks performed by our handyman services include:

Commercial Handyman Services near Lincoln, NE: Your business should be a reflection of the quality you demand. That includes the appearance and functionality of the facility, as well. It should have an aesthetic appeal that is pleasing to customers and conducive to productivity.

Let’s face it; with all the things that are needed in a commercial environment, all the things that pop up last-minute, miscellaneous daily maintenance tasks; these should not be designated as an “extra” duty for employees. That’s why it’s important to rely on the professional handyman services provided by Handyman Services of Lincoln

We are there to handle all the tasks that arise in the course of a business day. With the increased requirements for quality and quantity, it impacts the bottom line if production stops because of a glitch like a burnt-out light bulb, need for audio-visual setup or a new employee needing a cubicle installed. Individually, these tasks might seem somewhat trivial, but they can definitely interrupt the flow and functionality of the work environment. With a dedicated handyman maintenance service available, there will be no delays and operations can proceed unimpeded.

Another reason to hire a professional handyman service is when your commercial building is being built or remodeled. We specialize in the removal of debris during pre and post construction work.

We specialize in providing you with the best handyman for your project! Our member handymen can assemble it, install it, repair it, replace it or paint it! You name it! Our company has the pro that does it! Including Carpentry, Painting, Drywall, Minor Electrical/Plumbing, Flooring, Plasma/LCD Installation, Appliance Repair, New Appliance Installation, Plumbing & Drain Cleaning and more!

At Handyman Services of Lincoln, We do both residential and commercial projects, we provide an estimate service free of charge and we will come to you if a quote cannot be processed over the phone or via online access, We believe that our business is about you and working with you to see what we can accomplish, and to provide you with a reliable service at affordable prices, We will help find the solutions to your problems at any means. Our technicians are fully qualified to accomplish all tasks that are put towards them.

We are here to assist you with your residential needs, from Home remodeling, lawn care and maintenance, tree service, appliance repair and installation, as well as flooring, residential and commercial cleaning, air duct cleaning, cabinets installation and prefacing, we also assemble furniture, haul waste, debris, junk

Keeping your commercial space attractive and functioning is important for every business owner. Maintenance and repair of your facility is imperative because it can attract new clients and boost employee’s morale. Employees can’t be productive when they don’t have well organized space. Lack of maintenance will make your office look old and untidy. Most of us spend most of time in our workplace actually working so small disrepairs might go unnoticed.  To prevent workplace injuries and achieve the best environment, maintaining your building becomes very important.

A1 CONCRETE MASONRY OF LINCOLN
(402) 875 7358
concretemasonrycontractorslincoln.com

Commercial office building owners of Lincoln, NE who struggle to keep their space highly functional and flexible; Handyman at your service is the one stop solution to all their needs. Handyman at your service provides best maintenance and remodeling services to our commercial and institutional clients. Our trained staff completes any project, small or large, with confidentiality and respect to their surroundings.

Handymen at your service employ a wide range of skilled craftsmen that can handle just about anything you assign them.  Here are some the commercial handyman jobs we excel at:

Why choose our commercial handyman services in Lincoln, NE City?

We pride ourselves for our high quality work so let Handyman at your service make your facility just perfect.

Commercial Handyman Services near Lincoln, NE: The average handyman rate falls between $60 and $65 per hour. The cost per project can range considerably based on the size and complexity of the job and the experience of the handyman or handywoman. Expect to pay between $77 and $155 per job for smaller jobs that take between one and two hours. Larger jobs that take over 4 hours will cost $300+.

How much you pay your handyman will depend on several factors:

Size of a Handyman Job

The larger the job, the more time it will take to complete and the more it will generally cost. More experienced handymen can estimate how long a job will take before they start. Some handymen have certain jobs they charge a flat fee for as well. Discuss your project in detail with your handyman ahead of time to establish the price.

This includes relatively simple things such as replacing light switches and outlets. Replacing a broken garbage disposal is also considered a small job, as is repairing a leaky faucet, replacing a thermostat, or even hanging a picture. As a rule of thumb, if it requires simple hand tools and takes no more than 1 to 2 hours, it’s a small job.

Example: Fixing a water spout in the bathroom. The parts are there; they just need to be installed.

These are a little more involved. Medium jobs can take more time and require a little extra expertise. For example, repairing drywall involves spackle, a putty knife and attaching support material if the damage is large enough. Hanging shelves can also be a medium job as shelves must be properly anchored into studs. These jobs can take between 2 and 4 hours to finish.

Example: Replacement installation for a mailbox

These are the most involved of handyman jobs and include wiring for a home theater, installing heating and cooling registers, wall repair or installing a kitchen sink with all of the elements. Generally, if you’re wondering if you need a handyman or a contractor for a particular job, it’s probably considered a large job. These jobs can take from 4 hours to a couple of days to finish depending on the complexity.

Example: Add locks to certain interior doors, install a gate on the stairway for kids and pets, and turn a cubby into a linen closet all in one visit.

Keep in mind, that if the job is big, requiring $500 a day or more, or includes the use of heavy machinery (bobcats, front-end loaders, etc.) you may want to hire a contractor instead.

Hourly Rates for a Handyman

Commercial Handyman Services near Lincoln, NE: The average hourly rate of a handyman is in the $60 to $65 price range. However, there are professional handyman services that may charge higher, sometimes up to $125 an hour. The benefit of these services, while more expensive, is a degree of assurance that the handyman is a competent professional and will provide a certain quality of work. The national average is about $77 an hour.

How Does A Handyman Charge?

Commercial Handyman Services near Lincoln, NE: Handymen normally charge by the hour, but can also charge a flat rate by the job. Some may charge for travel time, and some may charge a markup on parts they buy for your job. When gathering estimates, this is something you want to know early on.

A handyman who works independently will usually charge around $60 to $65 an hour on average. Depending on where you live the actual price range can run from $55 to $75 for an independent operator. A handyman who is part of a larger business can charge up to $125 an hour or more. The advantage to this is that he is expected to have a lot more expertise and meet a certain standard.

Whether an independent handyman or part of a business, some jobs are best charged at a flat rate. These are usually larger jobs such as hanging chandeliers, mounting wall TVs, installing a toilet or a ceiling fan, or other such involved work.

The more complex a job is, the more likely it is to have complications. Also, some jobs can take a couple of days if preparation hasn’t been done. If you break it down, billing by the job can sometimes mean you are paying higher per hour if a handyman works quickly. However, some jobs take longer and you wind up paying less by the hour. So for example:

However, if the flat rate job is $150 and complications cause the job to take four hours, you’re paying $37.50 an hour.

Here are examples of some of the more common services and how long they take:

Some services are quite involved and charging by the hour would make the cost prohibitive. Therefore, many handymen charge more complex jobs. Here are some examples of services and prices that are often billed by the job:

Q:  What type of projects do you do?

Handyman Services of Lincoln is a full-service home improvement business. From everyday updates to custom renovation and installation projects, our skilled team of consultants and craftsmen are equipped to advise on and handle virtually all of your home needs. Typical Handyman Services of Lincoln projects include: bathroom renovations, kitchen updates, custom shelving and built-ins, window and door installation, home exterior restoration, insect damage repair, carpentry, masonry, plumbing, electrical and more.

Q:  What are your hours of operation?

Office hours are 8 am to 5 pm Monday through Friday. Handyman Services of Lincolntechnicians are available for projects by appointment.  We are closed Saturdays and Sundays for rest and recuperation. We are also closed on National holidays.

Q:  Do your fees include materials?

No.  Any materials purchased by Handyman Services of Lincoln for your job will be added to your invoice.

Q:  Do you do commercial property work?

Yes.Handyman Services of Lincoln works with businesses, government agencies, the military and retail establishments on a per project basis.  There is no need to set up an account with us, simply call when you need our help.

Q:  What methods of payment do you accept?

Q:  When do the charges for my project begin?

The billed time begins when the technician arrives at the job and ends when he completes the job or leaves for the day.

Q:  Do you require payment in advance?

Handyman Services of Lincoln requires that payment be made in full upon completion of the job unless other arrangements have been authorized by the management. Large jobs may require a deposit with intermittent payments agreed upon prior to the start of work.

Q:  Do you give free estimates?

Certain types of jobs will require an estimate.  We do charge a $35 trip charge for an estimate. Keep in mind that an estimate is a rough IDEA of what the job will cost.  We take every measure to keep costs within the estimate.  However, costs can be either higher or lower and will be billed accordingly. Handyman Services of Lincoln will keep the client informed as to the progress of the work.

Honey-do lists (a variety of small jobs) do not require an estimate.  It is impossible to properly estimate this kind of work.  We do not give estimates over the phone.

Q:  Do you subcontract any of your work?

No.  All technicians are employees of Handyman Services of Lincoln and have passed a National background check.

Q:  Are you insured?